It's far from clear whether the average consumer wants to 3D print. Take this trend as evidence:

MakerBot industries started out making kits for 3D printers. They then discovered that the market for printer kits (i.e. a set of parts) was vanishingly small. So they started to produce pre-built 3D printers and eventually withdrew the kit market altogether. With 3D Printers, it appears, consumers want a complete product, not a construction project. Why should it be any different for any other product category? 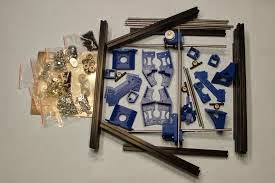 This shift of MakerBot's business no doubt went against the 'maker' roots of their enthusiastic and motivating CEO, Bre Prettis, but he had no choice if his new venture funding partners were to build a scale business.

MakerBot and their investors also discovered that very few people have 3D design skills, and so initiated an effort called Thingiverse to provide (and share) downloadable 3D objects for 'making' on a home 3D printer. No doubt some 'maker' or 'arts and design' users do adapt these designs .... but one cannot help thinking that if the object that comes out of your printer is the same as the download file, you might very well just buy a manufactured item.

Consumers may not have the time or skills or patience for 3D home printing. And the trend continues ...

MakerBot have announced at CES 2014 (Las Vegas) a new 3D content store which is being hailed by some as the 'iTunes' of 3D printing. Listen to how this is described:

"The game-changing new MakerBot digital store features a host of professionally designed digital 3D models, created by an in-house team at MakerBot, made to be simple and easy to purchase and print with one-touch." "3D printing can be a bit daunting from the outside, so we’ve created all these 3D designs that you can buy individual models or as a collection - a bit like songs - and create fun for kids and adults alike," admits Bre Pettis.

Previously MakerBot offered a cloud-based design sharing service called Thingiverse, which allowed users to upload their designs and share them with a community and access them from anywhere with a MakerBot 3D printer. The new digital store sits alongside the Thingiverse service, augmenting it with professional, proven designs that are guaranteed to work, and launches with six different collections of models primarily based around children’s toys. 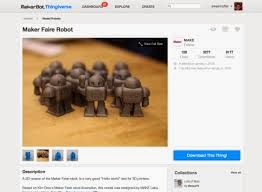 The models can be picked up individually for $0.99 or as whole collections of models for $9.99 and include mini characters spanning every day life, construction, dragons, knights, kings and queens, as well as little pet animals for the kids. For adults, the model collection also includes a series of rocket ships and “famous flyers” – models inspired by key real-life aircraft from history.

What the next step in this trend? Yes, you guessed it: just ordering the product from a supplier? That's got to be even simpler than the one-button automated software process that Makerbot are implementing between their 3D iTunes web site and a printer in your home. Seems over complex .... why not leave it to the supplier to decide how to fulfil (and customise to user preferences) your order .... from a shelf (inventory), or on demand 3D printing? Why does a home need a 3D printer? Do consumers really want 'distributed manufacturing'?

The trend which MakerBot (the poster-child of consumer 3D printing) seems to be admitting is that consumers want whole products, not processes. An order button on Amazon is surely no different from a 'Make Button' if there is no design involved. Consumers will always jump to buy the products they want, and care less about the process behind them.

Weigh up the following equation:  Amazon delivery in just a few days (or less) .v. ownership and maintenance of a 3D printer) only able to produce simple plastic models. No contest. One is a CapEx+OpEx model, the other an OpEx model. Unless MakerBot intend to give printers away for free.

And why not have Amazon decide whether to carry inventory or print on demand in their warehouses?

So what is MakerBot (and 3D Systems with Cube and Cubify) really creating? They are creating a new toy and hobby, not a manufacturing revolution.

And think about this: won't all the really interesting new products that consumers will want next (such as all the other complex gadgets at CES 2014) be far, far, more complex than any 3D printer will be able to create, no matter how sophisticated or expensive?

Discuss. What have I missed? 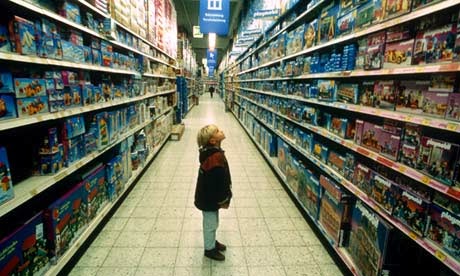 Those who are familiar with this blog will know that some of the 'thought experients' I set up should not be read as indicating what I personally believe. In the next article we'll look more closely at the tangled relationships that 3D printing creates between a product, its design, and its production and consumption, hoping to shed light on what will happen in 3D printing over the next few years
Posted by Howard Smith