Well, it had to happen, enthusiasts are 3D Printing lethal guns. Following the success of  user HaveBlue (a gunsmith) from the AR-15 forum in firing 200 rounds from a partially 3D-printed AR-15 (M16) others are now taking up the challenge of producing designs for, and demonstrating the viability of, 3D-printed weapons. Once designs were uploaded to Thingiverse others started printing gun parts, even if they did not have the skills to build a workable weapon that would not injure its owner in operation. 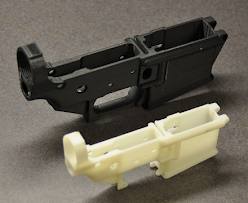 Of course, there has, and will continue to be, a retinue of garage enthusiasts employing a variety of engineering techniques, including CNC machining of gun parts,  who are in thrall to the idea of making their own weapons, as opposed to buying them off the shelf at Walmart. Moral panic about 3D-printed guns is probably over-stated. Nevertheless, the idea of anyone, anywhere, with absolutely zero skills as a gunsmith, yet able to print guns-on-demand from a CAD file downloaded from the Web, will surely send a chill wind blowing through civil society. Rapid advances in 3D printing (moving parts, multiple material prints, novel materials potentially undetectable at airport check-ins, use of metals) will only serve to pour petrol on the fire.

Which is the why the announcement of a group calling itself Defense Distributed and whose stated aim is to produce a 100% 3D-printable gun, and then to spread it to all by adapting the design to ever cheaper 3D printers, is not going to be welcome.

Defense Distributed are a loose band of collaborators from varied backgrounds and who have a vision of what they call 'private law society'. It is unclear precisely what philosophies the group subscribe to, but the term has been defined by others as:

A society where every individual and institution is subject to one and the same set of laws! No public law granting privileges to specific persons of functions (and no public property) exists in this society. There is only private law (and private property), equally applicable to each and everyone. No one is permitted to acquire property by any other means than through original appropriation, production, or voluntary exchange; and no one possesses the privilege to tax and expropriate. Moreover, no one in a private law society is permitted to prohibit anyone else from using his property in order to enter any line of production and compete against whomever he pleases.

The relationship to 3DP is clear: Utopian visions of a future in which low cost 3D printers are available to all citizens and where every garage has been converted into a personal manufacturing laboratory.  Although in the case of Defense Distributed the argument seems to focus on the uniquely American ennui surrounding the right to bear arms. The group's "Wiki Weapon" site is full of terms related to weapons and armory. They have even thought of a scenario in which bullets become unavailable pointing the possibility of 3D-printed designs for blunderbusses and bang-sticks accommodating "any kind of projectile".

Despite the overt focus of Defense Distributed on lethal weaponry, the language they use on their web site may indicate that this is a thought-prototype to highlight a thoughtful philosophy. Quoting from their  site:

"Guns prove out some of our younger generations’ beliefs about information and sharing at an extremity. If we truly believe information should be free, that the internet is the last bastion of freedom and knowledge, and that societies that share are superior to societies that censor and withhold, then why not guns? The firearm has pride of place in underlining an individual’s significance as a moral agent."

"This is a veiled way of asking if people are capable of handling their own freedom. Still a serious question, but let’s bring the paternalistic assumptions out into the sunlight. If you’re a modern political “progressive,” there is nothing that can be said to sway you from your social contract literal-isms and sense of duty to the cowering masses. But achieving your world of perfect safety, and transferring all risk of freely-printed guns, will require tyranny."

These guys may be educated!  The founder, Cody Wilson, is an engineer and law student.  In his manifesto he even quotes John Milton's Areopagitica for the liberty of UNLICENC'D PRINTING to the PARLAMENT of ENGLAND. Milton's title alludes to Isocartes's seventh oration, often called the Aeropagitic Discource (about 355 BC). There, Isocrates addresses the General Assembly of Athens on a topic of civic safety.

The group's crowd-funding plans are already in some disarray after Indiegogo froze their campaign and took down their public funding page, pending a Terms of Service review. They had raised $3015 to this point. Now they are accepting direct donations via PayPal, Bitcoin (an untraceable and encrypted P2P experimental digital currency with no central authority) or good old physical mail to P.O. Box 301765, Austin, TX. Where else!
Posted by Howard Smith