3D hobby printer start-up PrintrBot have used KickStarter to crowd source seed funding for their venture. Their modest goal was to raise $25,000, a sum which would hardly be noticed in the portfolio of most venture capitalists (VC). Yet that figure is actually quite large for crowd sourced funding if one looks at the typical projects that the funding platform, KickStarter, was set up to support. And that is that makes this story even more surprising, because PrintrBot overshot their target by more than 3000%, achieving pledges of $830,827 from 1808 backers. That's an average of $459  per backer, which is itself an interesting figure being about 1/3 or 1/2 the price of a typical hobby 3D printer on the market today. For example, a MakerBot 'Thing-O-Matic' ships for just over $1000. (no final pricing has been announced for PrintrBot to my knowledge) 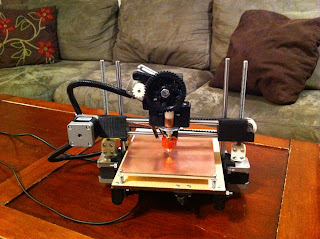 The Kickstarter outreach project was originally announced to the RepRap collective/community as being the smallest, simplest, cheapest RepRap 3D printer in the world. There must be a lot of 3D printer enthusiasts eyeing what PrintrBot have achieved here with some envy.

Another interesting aspect of this story is a trend I am seeing more and more where the incubation, ideation and initial design phases of a start up are shared with the community using blogs, Wikis and social media to source ideas and guidance from the community and foster a sense of joint ownership and commitment to the outcome. Raspberry-Pi, for example, a ARM GNU/Linux box with a tiny footprint and unbelievable target price of $25, has been sharing its development process from the get-go. Given PrintrBot's amazing funding achievement on KickStarter perhaps I underestimate the power of communities to contribute in this way, but a few questions immediately come to mind.

$830,837 is a hell of a lot of cash! Would the community fund a second, or third or fourth, 3D printer start-up with so much gusto?

How will others feel when their efforts are not funded so generously? Does this not jar with the principles of the open source hardware movement?

PrintrBot is a spin-off of RepRap whose goals are to provide a free 3D printer to a wide community and to share design improvements that emerge from the community as modified 3D models which could themselves be 3D printed for free (if you owned or had access to a RepRap printer and a suitable length of plastic filament.)  How many RepRap spin-off 3D hobby printer start-ups does the world need? How sustainable is an approach that relies on crowd sourced funding?

There is nothing new about communities pulling together to fund important projects, and this has nothing to do with the Internet or with 3D printing. When parents pool their resources to buy new computers for their school they are supporting their community. They are not, however, doing so to create a commercial venture.

Wikipedia points out there are questions about the legality of taking money from 'investors' without offering any of the security demanded by legitimate investment vehicles. Sites such as ArtistShare, KickStarter and Pledgemusic therefore have a failsafe: They hold funds in an escrow account. If the nominated target is not reached, all funds are returned to the backers. That's all well and good, but it does not resolve questions of the obligation a commercial venture has to the original community from which it leveraged both intellectual property and funding in order to kick start its venture. In that sense, what are PrintrBot's achievements?

PrintrBot owner, Brook Dunn, claims that his design "does away with the finicky calibration and adjustment from which most 3D printers suffer". So the company is bringing in new innovation in that regard. And Dunn's team appears to be expanding. Using the funds they now have pledged, Laine, Alex, Carl, Brook and Brain are planning to set up a bot farm, a kind of 3D printing production line for 3D printers!

Is this a business, or an experiment? The main idea is to build a simpler 3D printer. They used that idea to crowd source the funding? For what purpose?

The PrintrBot Kickstarter page lists what it will do with the cash. If you pledged $1 you will receive a thank you on the PrintrBot website. For $5 you'll receive a personalized thank you card. For $89 you get a "Full set of printed parts to build a Printrbot - just add hardware". For $232 you get a "Bare Bones Kit: Printed parts, bearings, rods, belts, bolts, nuts, including an assembled extruder. (no motors, electronics, or hot end)." For $499 you get "Everything you need in one box to assemble a Printrbot Lasercut ("LC") and start 3D printing." And so the list goes on.

I'm confused. This looks just like a list of advance orders for PrintrBot parts and kits. Won't all the cash be spent shipping out a slew of early orders? How much is genuine investment?

In the Kickstarter round of funding for PrintrBot there were 1808 backers. That's 1808 orders PrintrBot now have to fulfill? Will PrintrBot be able to fulfill all these pledges? And is this really what seed funding is best used for? Replication for commercial success is not the same as innovation. Or does that just happen along the way as the ride continues?

In the world of Venture Capital, $830,827 is a very respectable seed or even Series-A funding round. Those investments would not be regarded, however, as advance orders from end users. VC funding would be used for product development and/or marketing. The Venture Capitalist would bring expertise and resources to the business. A Venture Fund is a partnership between the start-up and the expertise needed to grow the business. That's not something you can get from crowd sourced funding mechanisms such as KickStarter.

Long before PrintrBot decided to use Kickstarter, the founders already knew they could build a 3D hobby printer, after all, RepRap and others had showed the way. What PrintrBot did not know was whether they could sell such kits to consumers. And they faced a common problem in any assembly business of needing funding to source the component parts before any kit or assembled product could be sold.

Crowd sourcing has given PrintrBot a way to avoid investing its own resources. It leveraged the community to fund its own supply chain and simultaneously to validate its market through a batch of initial orders. Nothing wrong in that, but here's the rub: Fulfilling those pre-orders and meeting 1808 pledged obligations is likely to become an all consuming task for PrintrBot. Will it detract from the innovation they need if they are to flourish by distinguishing themselves in the market?

I am not convinced that crowd-funding is a terribly good way to fund a 3D printing start-up business. Even if it works out for PrintrBot, it is unlikely to be repeated. To my eye, innovative 3D printer start-ups should be looking to work with established and resource rich VCs who are able to distinguish between experiments and long term business opportunities. VCs use the rigor of the market and analysis of trends to determine the appropriate level of funding at each point in the development of the business.

I am not a VC nor do I have any links to VCs or commercial interests in any aspect of 3D printing. I am however passionate about the potential. I feel that rather than leveraging the community to crowd source funds for a small number of 3D printer start-ups like PrintrBot or other RepRap spin-offs, I believe that the RepRap Community itself could use crowd-funding to sustain its forward momentum to the benefit of all. For example, what could RepRap do with $830,827? I would put the focus on crowd sourcing the ideas for spending that money, if it were available to the community.

Like parents choosing to buy computers for schools, crowd-funding seems more suitable for community decisions than it does for commercial enterprises. But what do you think? If you are a member of the RepRap community, or work in or around a 3D printing start-up, please add your comments below. I am genuinely interested in understanding the views of the community on how best to avoid a possible rash of poorly equipped RepRap spin-offs many of which may fail to stall beyond the initial orders they receive.
Posted by Howard Smith