You know how everyone loves to watch YouTube clips of excited owners of brand new gadgets, opening the box and unwrapping the wonders within, such as iPads, iPhones and other exotic technology, well: here is an example of one proud owner's experience opening the box of a brand new Solidoodle 3D hobby printer. 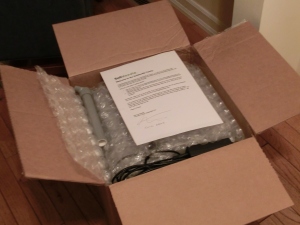 Laura Hall of Solidoodle was in touch via email and told me that the Solidoodle was: "In a nutshell: FULLY assembled, build size 4x4x4 in a box that's 10x10x10, and $700."

Sam Cervantes, founder of Solidoodle, envisages every tinkering dad, every artist, every child, and everyone non-technically oriented person to unleash their creativity using the Solidoodle. "No waiting anxiously for your designed part to come in the mail, and no epic sign-up process to get to a big machine in a university fab lab.  Take it out of the box already calibrated, plug it in, feed in the filament, and start printing.  Easy."  It's a vision that seems to be increasingly shared with other 3D hobby printer start-ups.


How many RepRap inspired hobby 3D printers do we need? I have no idea, but for a device that is intended to be a kind of Universal Object Printer, the community are sure spawning a lot of different variations. Recently for example, PrintrBot used crowd-funding to kick start its business with $830,827 making and delivering calibrated and assembled 3D printers inspired by the RepRap resources.
Posted by Howard Smith