Buildatron and the Alpha One Labs hacker collective in NYC Brooklyn

PCMag has posted a comprehensive behind the scenes look at yet another 3D Printer start-up Buildatron.

Like me, PCMag see parallels with the early hobbyist computer industry of the late 70s and early 80s. However, PCMag is going to have to be careful to scale back hype and claims that 3D printers can print themselves. Some simple parts perhaps, but certainly not all and certainly not the important ones. That future is a long way off.

Today, the only parts a hobby 3D printer can print of itself are a few basic plastic components that are used to join various far more important parts together. Indeed, I don't think the vision of 3D printers printing themselves is even that important to the future of 3D printing.

Buildatron hangs out in hacker space called Alpha One Labs in Brooklyn. A lot of these hacker collectives are popping up all over the world. Another, also in Brooklyn, is called the NYCResister, and was founded by Bre Pettis, also founder of MakerBot Industries.

Hacker collectives are important to the 'maker culture' - epitomized by magazines such as MakeZine - because they let individuals share expensive tools and exchange the knowledge and physical experiences of working in the world of real ("made") things, and not just the rather more ephemeral "digital" world.

Out best wishes to Buildatron and to all the other 3D Printer startups listed in this blog. There is no doubt that some will move beyond maker experiments and become a permanent fixture of the coming 3D print revolution. Is there a 3D Print "Dell" out there? 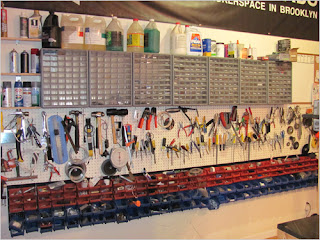