How to save the world from Pologons! Uformia's Volumetric Modelling for 3D Printing

In this video, a sketch based user interface is able to quickly create 3D models with symmetric inner structures, such as fruit and vegetables, volcanoes and anatomical models. The idea is that 'volumes' can then be sliced , diced, duplicated and modified, using existing CAD operations, yet preserving the volumetric structure.  The mesh is re-calculated.


Volumetric modelling is an active field of research with obvious applications to 3D printing.

Skip over to the Uformia Kickstarter campaign video:


Imagine how a piece of clay is pulled and pushed into new shapes and you'll get the idea. To quote the Uformia FAQ "It means the object is a piece of malleable material, not a collection of paper sheets glued together. Whatever you do to it, you still have a valid solid object, unlike in traditional solid modeling, where objects can have cracks and other surface issues." 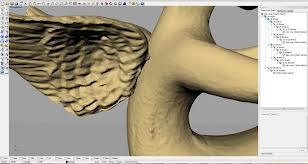 In traditional CAD, 3D objects are modelled using 2D primitives. The 3D object is approximated by a mesh of flat polygons. The Uformia software reduces every object to its mathematical function, allowing for the modelling of everything from the micro-structure (e.g. of a bone) to its general shape.

We've previously written about how specialised plug-ins to CAD software are appearing to handle all kinds of specialized modelling manipulations. To introduce volumetric modelling to the market, a Uformia plug-in called Symvol is now available for the popular Rhino software. Take a close look at the Uformia showcase. The Symvol plug-in is just the start of Uformia's vision for re-inventing 3D Design and Fabrication software. The advantages include:
Also see Hyperfun,  Voxel, NURBS, Solid Modelling
Posted by Howard Smith