Inside the Bot Queue and the 3D "Factory of the Future"

If you are based in the US, and recently used Shapeways to print our your 3D model, it would have been shipped to you via UPS, without exception, from their fabrication plant in the Netherlands. As of June 2012, Shapeways have shipped more than one-million user-created objects around the world. Hardly what it means to have a 3D printer in your home!

Shapeways are now expanding their additive manufacturing capacity by creating what they call a "Factory of the Future" in New York City. The new 25,000 square foot facility will be able to print as many as five million products a year. It will house between thirty to fifty industrial-size 3D printers.

That's OK for the 'Bots' (a common name for a 3D printer) but what about unemployment!?

The number of direct human jobs created by Shapeways move into NYC will be tiny. They hint at fifty new 'high tech' roles. That should not be a surprise. Future 3D print shops will be all machines. Additive manufacturing puts the 'manufacturing' into the hands of designers and consumers, not factory workers. To illustrate: Shapeways uses software to route jobs to their bots. When a machine finishes one object, it simply asks for the next in the queue. Simple!

Listen to how NYC Mayer Bloomberg promotes 3D Printing and the Shapeways facility:

Anyone setting up a similar factory full of 3D Printers is also going to need a way to route jobs to the bots. Future 3D fabrication plants will no doubt consist of many kinds of machines, each capable in different additive or complementary manufacturing methods, so it will be necessary to analyze incoming 3D digital models and root them to queues corresponding to each machine type. Ponoko, another Web based on-demand factory that provides 'subtractive' laser cutting and CNC routing in addition to 'additive' 3D printing, must also have deployed job scheduling systems to run its operation.

The open source 'maker' community are also chasing job control. Bot armies are popping up all over the planet. In the video below you will see a fleet (or array) of thirty RepRaps. They are owned by a tiny outfit called Aleph Objects based in Colorado. Take a look at a video as one guy tends the machines: 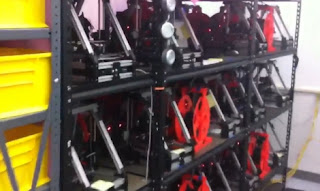 The need for 3D print job scheduling is growing, and as expected open source is coming to the rescue. BotQueue is a Web dashboard and software that lets you control multiple 3D bots through the Internet and turn them into your very own 'Factory of the Future'.

BotQueue was created by Zack "Hoeken" Smith, a co-founder of MakerBot Industries where he dealt with running a fleet of MakerBots in operation.

As Zack says "Now you can build the robot army you've always dreamed of".

Listening to the NYC Major's speech with its flowing oratory about the potential of 3D printing to bring manufacturing home, it strikes me that the world of Venture Capital (VC) circling around hot start ups such as MakerBot Industries and Shapeways, is light years from the RepRap 'maker' culture of which Aleph Objects is an example. Yet none of that activity would not be possible without prior twenty years of private investment in R&D that enabled the slew of low cost parts, software and electronics required to 'make' bots and bot factories. I do hope the VCs now homing in on next generation manufacturing will place their bets rather better than those who backed projects with no business model and which led to the Dot Bomb bubble of the late 90s.
Posted by Howard Smith