All over the world, a tiny group of very special people are hard at work at something hardly anyone understands. No, they are not just printing 3D objects on 3D printers that they can buy, rent or access over the web via a 3D printing service. No, they are 3D printing (and fabricating in other ways) the parts they need to bring their own designs for a 3D printer to life.

The Rook 3D printer is one such development. It's creator Jolijar is blogging about it here. And each time that happens, someone injects a 3D printer innovation into the 3DP-technology innovation stream. In this case, it's something to do with  "getting rid of that horrid threaded rod approach"! 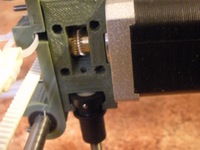 Innovations add up over time. Eventually, these innovations are released or leak onto the Web, via open source hardware specifications, or by uploading designs for parts for new 3D printers into object repositories like the Thingiverse. There, they can be downloaded, printed and used to make new objects, including parts of new 3D printers. And as this happens, each generation of 3D printer design is just a little bit better than the last.

Maybe the rate of innovation in 3DP won't be as rapid as with the far more malleable open source software projects. Maybe it will be a lot slower. Maybe the analogies to the Cambrian explosion of creativity that occurred when we hooked up computers via IP networks to form the WWW are utterly unrealistic. Maybe 'digital evolution' will always over-shadow a 3DP evolution. Nevertheless, something is happening. 3D Stuff is being digitized as 3D models. There, it too can be 'digitally evolved'. That new stuff is then being 3D printed. And some of that stuff is new parts for new kinds of 3D printer.

Talented engineers are working hard to make it work, and to bring about a new industrial Cambrian dawn. It's very exciting, but its also a very long road.
Posted by Howard Smith