A 3D printer-created lower jaw has been fitted to an 83-year-old woman's face in what doctors say is the first operation of its kind. The implant was made out of titanium powder - heated and fused together by a laser, one layer at a time. The implant was built by LayerWise - a specialised metal-parts manufacturer. 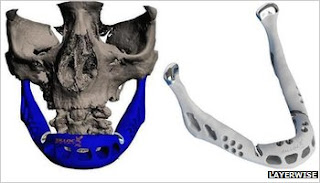 As we pointed out in another article, with 3D printing, complexity comes for free. The Jaw implant is a complex part - involving articulated joints, cavities to promote muscle attachment and grooves to direct the regrowth of nerves and veins. Once designed, it only took a few hours to print.

"Shortly after waking up from the anaesthetics the patient spoke a few words, and the day after the patient was able to swallow again," said Dr Jules Poukens from Hasselt University, who led the surgical team. "You can build parts that you can't create using any other technique. For example you can print porous titanium structures which allow bone in-growth and allow a better fixation of the implant, giving it a longer lifetime."

Metal Additive Manufacturing is a new solution that enables designers to rethink the way complex parts are made. It is an additive technology similar to the conventional polymer Rapid Prototyping.

The advantages are that the surgery time decreases because the implants perfectly fit the patients and hospitalisation time also lowers - all reducing medical costs.
Posted by Howard Smith