Klaus Stadlmann has "3D Printed" an object at 20um. See image. These objects are approximately the size of a dust particle. The technique is called Two Photon Polmerization (2PP).

Stereolithography, which is a rapid 3D prototyping process, and the 2PP technology are based on a similar mechanism - light triggers a chemical reaction, leading to polymerization of a photosensitive material.
Stadlmann went onto to build the world's smallest 3D Printer for, he claims, e1500. Watch on TED here. Perhaps such tiny, affordable printers could "someday make customized hearing aids -- or sculptures smaller than a human hair"? 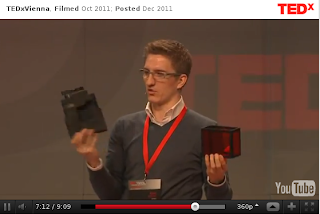 This technique is not new. The image below shows  micro-scale dragon (left) and a movable windmill (right) fabricated by two-photon polymerization in organically modified ceramics. This image appeared in an issue of Photonics Spectra in 2006.