This blog has argued that the oft-cited parallel of 3D printing with the emergence of computing in the 80s is wrong. Whereas a computer is a general purpose device, "3D printing" is not.

A digital computer is a platform. On it you can build valuable applications ranging from personal productivity tools (such Microsoft Excel) to enterprise systems (such as SAP ERP) to Google (a global amenity).

3D printing is not a platform in the sense a computer is. 3D printing is a diverse set of additive manufacturing techniques that share little in common. Each has potential in its own market, but that potential is realized largely within existing product categories.

Others are now making similar points.

If you are thinking of investing in 3D printing? take care. Citron Research, a short sell advisory, has come out and is claiming that "3D printing stocks are vastly over-valued". They, like we, believe that 3D printing is an evolution and not a revolution.

Citron are keen to point out that 3D printing has great potential. Direct digital manufacturing has a place in the new industrial landscape. It will grow incrementally as new technology enables new applications. We agree. But ...

Citron are rampant in their criticism of hyped stock activity, and mainly target their angst on 3D Systems [DDD]. This is the company that controls patents in stereolithography, chose not to bring that technology to a wider market and is now trying to block FormLabs (a venture and crowd funded company) from developing new products.

Here are some of the things Citron has been saying:

"Additive manufacturing has been around for 30 years.  The only thing that is new in recent years is availability of consumer-priced 3D printers – from many sources -- along with a frenzy of thoughtless and shallow media attention."

"3D Systems presented their 'Next Big Thing' product on Good Morning America – In 1989 – This is not a typo." 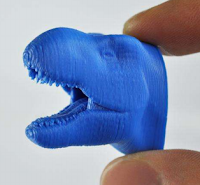 "In order to have a revolutionary technology, one would think that R&D costs would be off the charts, as the company would be busy hiring the brightest minds that are going to change the world.  For the previous year, R&D expenses were a paltry $6.5 million….that's for multiple hardware product lines for consumers, designers and production professionals, plus software, plus materials.  ...For a $3.6 billion dollar treasure trove of company, that is less research than we have EVER seen in a bubble stock. In fact, DDD has made no significant investments and no advances to the main industrial process SLA (Stereo Lithography) or SLS (Selective Laser Sintering) which are the main production print engines, in the last five years."

Citron point out that stories associating 3D Systems and the aerospace industry, in regard to 3D printed parts and the F-18 jet engine, are highly suspect. They say "The truth is that 3D Systems does not make one dime in revenue from parts on the F-18, not are their machines able to print in metal, not the materials, and not engineering or other services."

Citron ask: "With no material investment in R&D, what has 3D Systems done with their capital?

The company has  made a large number of acquisitions (32 in fact), but almost all of these are small.  They've bought a few hardware and software companies, and also numerous service bureaus, most of which were showing slow or no growth.  In fact, some of the service bureaus were on the brink of bankruptcy. Citron claim they could "write another 10 pages on our analysis of 3D's roll-up accounting engineering and sheer gimmickry to grossly exaggerate their organic growth."

And lastly, they state that it was others (RepRap, MakerBot etc.), and not 3D Systems, who created the market for the home printer. Poking fun at the time these printers take to produce objects ("12 hours to print an ugly beige Falcon") they quote a Citron reader who joked, "Why would you ever buy a 7 cent plastic falcon in China when you can print one at your home for roughly $17.50, after  amortizing the printer?"

So are we looking here not at a revolution, but rather, as Citron put it, "a reincarnation of a really old story about a mature industry with a few new high-visibility cheerleaders around it."

Pointing to industry consultants such as Todd Grimm, they quote him as saying that "Yes, 3D printing is here to stay, and yes, it will experience strong, attractive growth over the coming years. But, this bubble of excitement will pass."

Are he and Citron right?

Is the recent round of industry consolidation not a sign of growth, but of an attempt to beef up stock values in the hope of finding new revenue streams.

You be the judge.