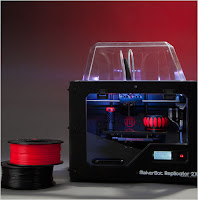 As everyone knows the emergence of low-cost 3D printers based on the Fused Deposition Modelling (FDM) of thermoplastics grew out the RepRap and 'maker' communities. They were pursuing the development of new tools, and used an open source hardware model to pool the efforts of many.

Companies such as Makerbot grew from such open source roots to become powerful Venture Capital funded start ups. They signalled the opportunity to sell to millions of consumers.

The trend was noted by industrial players such as 3D Systems who are now commercialising very similar technology for children and their parents. The Cube and Cubify is one example. 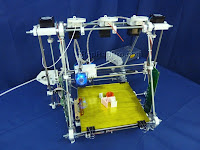 The open source community did not fall over and die. Just as in the world of Internet and enterprise software, communities are still innovating.

While Makerbot is touting its Makerbot 2X Printer with dual-extrusion, RepRapPro have announced the Tricolor Mendel - an open source 'Mendel' design upgrade, designed to work with three colors or three different plastics at the same time.

The dice below is one example of what could be printed on a tri-trusion printer, with a little care and oversight. 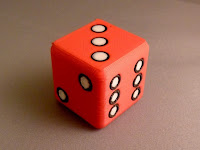