Layer by Layer asks: Is the Personal 3D Printing Revolution Slowing Down?

While the debate rages about whether or not consumers will want 3D printers at home, start up LayerByLayer is making that assumption. The company is attempting to make it as easy as possible to source the best 3D designs for great 3D printable product and have them 'materialize' on your very own 3D printer. 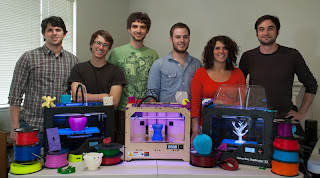 As they say "Right now, the technology is too inaccessible for non-technical consumers to find useful, and the majority are left asking, "What can I actually do with this?" It’s our job to change that."

LayerByLayer are realistic about the market. In an intelligent blog entry entitled "Is the Personal 3D Printing Revolution Slowing Down?", they point to research by respected AM industry analyst Wohlers Associates, which found that the growth rate of the personal 3D printer market for 2012 was significantly lower than the growth rate in 2011.

LayerByLayer are correct to point out the following:
It will fascinating to see whether innovative services such as Layer By Layer can create the 'Killer Apps' that will persuade more consumers to want a Personal 3D Printer in their home.