Recently there has been rumors of Makerbot Industries being up for sale / acquisition. Now we know the facts: the company has been acquired by 3D Systems' rival Stratasys. I suppose it was obvious really. 3D Systems [DDD] has the Cube, now Stratasys [SSYS] has the MakerBot.

There is space in the market for both of these lower-end systems. The acquisition of MakerBot by Stratasys however tells us something important about the broader market for Additive Manufacturing. 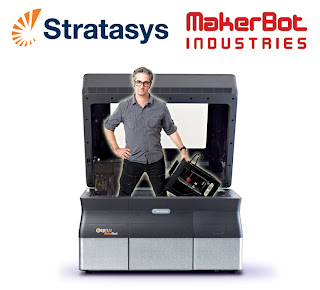 When Stratasys and Objet 'merged', which followed the acquisition of ZCorp by 3D Systems, we asked whether this consolidation was a sign of growth in the sector, or a rush to artificially bolster revenue and profit?

Now the MotleyFool are saying roughly the same thing.  In an article entitled Stratasys Buy Shows 3D Industry Getting Ahead of Itself they explain how investors are advised to look carefully at the different sectors of this complex market, before assuming that buying into the two largest consolidating firms is a sure recipe for success.

Whether or not you win by investing in DDD and SSYS, the reality for Stratasys was this: how could they let arch-rival 3D Systems steel away the potentially lucrative (underlined) consumer/maker market all by itself. Stratasys must have carefully weighed the options of make versus buy in the plastic FDM space? What they have bought is a great brand and advocate: Makerbot founder Bre Pettis.

And maybe things at MakerBot are not all clear cut. As this blog has commented before, the number of plastic FDM 'RepRap' inspired printers out there is now over one hundred, and while many won't make it beyond the start up stage, their very existence proves that the technology is not so complex to re-create. Imagine HP buying into one of these companies. Not in your lifetime. HP and any other large manufacturer could re-create the technology of the Cube, Makerbot or Ultimaker very easily. Even so, they may not choose to do so. For the reality of 3D Printing for consumers and makers is that it is a services-rich business, as Shapeways and i.Materialize show only too well. It is not so clear that we'll all have 3D Printers at home.

So is the Motley Fool right to point to the industrial markets and the more advanced additive manufacturing technologies for the future growth potential? Or is there a massive untapped consumer/maker market just around the corner if the 'Killer App' can be found?

It all goes back to those arguments about Hype or Hope in 3D Printing.