It looks like Make Buttons really will be coming to a desktop near you ... Microsoft has even created a new icon for 3D Printer Devices in Windows 8.1

In among all the complaints about Windows 8, and Microsoft's efforts to counter the advance of Apple OS X, it appears they are staying true to their course and adding new APIs for new devices .... the latest being Native 3D Printer Driver support for devices such as the Cube and the Makerbot! 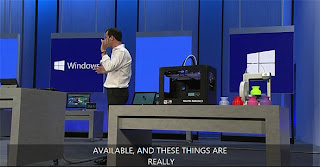 Here’s what Microsoft has said about this:

"For app builders, it offers an application programming interface (API) for app developers to send their 3D models to, just like apps have been able to with 2D printing for a long time. For hardware developers, they can provide drivers that are automatically downloaded and configured when the user plugs in their new 3D printer. Windows 8.1 provides the helpful job spooling, print queue management, and UI support that it always has. And what’s great about this is that app builders can send their content to lots of 3D printers with no special work for each device – including those that haven’t even been designed when the app is shipped. For 3D printer devices, one of the challenges has been getting lots of interesting content to print. Now, these 3D printers can get content from any app that supports 3D printing in Windows 8.1, with no special work for each app, and even work automatically with apps that ship in the future."

Whether or not Microsoft believes Personal 3D Printing (P3DP) will go mainstream is unclear, but they don't want to be left out of the action if it happens. There is even an rumor that Microsoft is going to start selling 3D printers at Microsoft Stores.

MakerBot - who have been acquired by Stratasys - is coming right out of the gate with a new 3D printer driver for Windows 8.1 that offers “plug-n-play and seamless end-to-end printing from a wide variety of applications directly to the MakerBot.”

And here is a video showing 3D Printing from Windows 8.1. What's striking about these demos is that it is clear that with 3D Printing, It's the Software Stupid.