Formlabs, the promising stereo lithography start up that raised $2,945,885 on Kickstarter and was then sued by 3D Systems for patent infringement, but decided to move full steam ahead into production, is now building a printer farm to fulfill its commitments to backers. 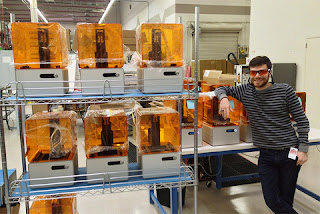 As a first step, Formlabs are required to 3D print four hundred and twenty five (425) unique Gyro Cubes. And that is a not insignificant undertaking.

Since I contributed to Formlabs' Kickstarter round, I am one of those people waiting for my Gyro Cube.

And I for one am prepared to be very patient.

As one wise person said in a Formlabs blog thread, a thread filled with people who backed Formlabs at higher levels and who are naturally impatient and excitedly waiting to be shipped a complete FORM 1:

"If they do, we’ll all be in on the ground floor of an exciting new technology – something that might be as revolutionary as the PC. I recall spending way too much for flash-in-the-pan early home computers…Timex-Sinclairs, Commodore 64’s, Amigas, early Mac’s, etc. Wanna be on the bleeding edge? You gotta grab the train as it rolls through the station and hang on tight, ‘cause it’s gonna be a bumpy ride."

For me, history is repeating itself. Three decades ago it took me two years and a lot of hard work before my home-built kit computer, the seminal NASCOM 1, could take on real work.