The significance of consumer 3D Printing Services has been confirmed by a $30 million Series C round of financing, led by the prestigious venture capital firm Andreessen Horowitz.

The current investors of Shapeways, including Union Square Ventures, Index Ventures, and Lux Capital also participated in the round. Chris Dixon, partner at Andreessen Horowitz, is joining the executive board of the company.

"Shapeways eliminates the fixed costs of manufacturing and makes use of breakthrough advances in 3D printing," says Chris Dixon, General Partner at Andreessen Horowitz, who is also a big fan of 3D printing. 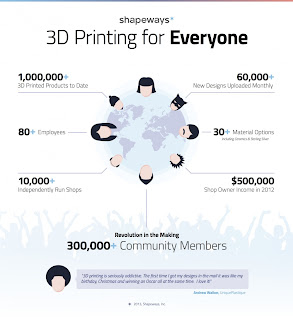 "We believe that technology is at its best when it enables human creativity. The Internet unlocked the world of bits. 3D printing is unlocking the world of atoms."

According to an infographic released by Shapeways, the service hosts 10,000 shops with over 1,000,000 3D-printed products. And 60,000 new designs are uploaded every month.

"Shapeways Shop Owners are the future of small business: they don't have inventory, they rapidly iterate on products, and they have direct access to consumer feedback," said co-founder and CEO Peter Weijmarshausen.