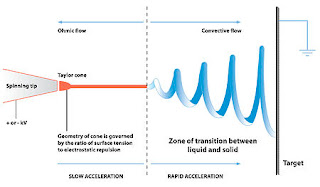 I once asked if Molecular Beam Epitaxy (MBE) counted as "3D printing?" According to at least one media story it does. I am now asking if electrospinning also counts?

Once again, a story connecting "3D printing" and an esoteric manufacturing technique is making the news.

Researchers at the Wake Forest Institute for Regenerative Medicine have apparently "3D printed" a material with the characteristics of human cartilage making it more amenable to surviving and even repairing itself in the body.

Printing bio materials from gels using inkjet technology is well understood. The difference here is that the electrospinning technique was added in order to produce porous and flexible 'mats' of synthetic polymer. 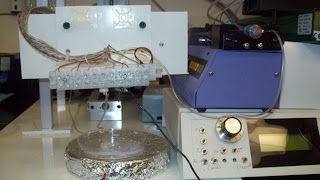 Electrospinning uses an electrical charge to draw very fine fibers from a liquid.  It is similar to electrospraying and conventional dry spinning of fibers.

It is unclear from published reports whether the ink jet and electrospinning processes were really combined in a new hybrid technology. The ink jet component of the experiment may have been limited to deposition of the living cells in amongst the fibrous layers creating by the electrospinning.