Is paper the new plastic filament at Staples?

"3D printing" refers to a slew of very different technologies. They share only one thing in common, a layer-by-layer approach to building an object.

In one process, plastic is squirted from a hot nozzle which moves in the X and Y axis, while the platform upon which the object sits moves in Z. It's called Fused Deposition Modelling (FDM) and comes in a few variations. It's the process used in most hobby printers because of its simplicity. 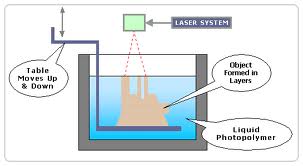 In another process, a laser beam flits across the surface of a liquid in wild and rapid movements. Where it touches the liquid a layer of the object is solidified. By moving the container in which the layer is being drawn, a complete 3D object emerges as if by magic! It's called stereolithography (SLA) and has previously been very expensive. However, new entrants like Formlabs will eventually be successful and prices will drop to allow all designers to have a unit on their desk. 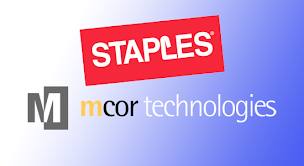 In a very different process developed by mcor technologies a ream of standard A4 paper is used. Each sheet is fed into the machine, and laminated to the layer beneath using a water-based adhesive. Glue droplets are placed only where they are needed. Color is applied using inkjet technology to each page, as the build proceeds. After many layers have been built up, the ream can be removed from the machine and a solid object broken out. A tungsten blade is used during the process to cookie-cut the shape of each layer. Because the mcor process uses paper as its raw material, it works out cheaper for some applications.

Using standard paper for 3D printing is pretty unique, but mcor can also do this in a million colors, in 5760 x 1440 x 508dpi, and claim to deliver consistent, rich color, from part to part. How? See here

The company has recently cut a deal with Staples in the Netherlands to provide 3D model printing on demand. Customers will upload 3D data to the online Stables Office Centre and will pick up their model in their nearby Staples store (or shipped).

Because all of these processes are very different, and there are many more, each 3D printing 'technique' will find its niches in specific applications. There is no universal approach (yet).