Last month I designed a robot model using an online tool called MyRobotNation. A few days later it turned up in the post. It was great fun, rather expensive, but I love my 3D printed robot. I showed it to my nephew and he immediately did the same. 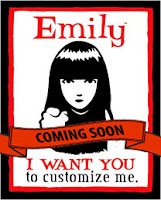 My niece does like robots, but is not obsessed with them. Sensing she was feeling left out, I began hunting for a 3D print service that would appeal directly to girls. So it came as a great relief that I found MAQET and their impossibly cute series called "Emily the Strange".

Like all good designs, Emily comes with a 'Make It Real' button. I do think we are going to see a lot of 'Make' buttons coming to a device near you.

Founder of MAQET Keith Cottingham is a San Francisco-based artist whose work fuses computer art, photography, animation and sculpture. Keith believes the world of mass-produced collectibles has lost its imagination. 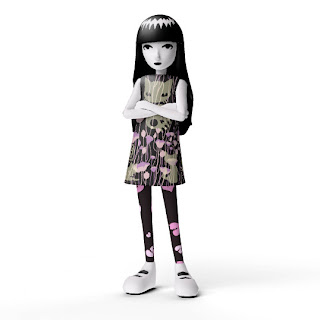 Designing My Emily consisted of choosing a pose, expression, starting patterns for her clothes, and then using various paint and 'stamp' tools to decorate her. (left) The system also offered to allow me to import my own art work.


Technical detail
As with MyRobotNation, MAQET collectibles are materialized on ZCorp 3D printers. Unlike MyRobotNation the models are finished in an attractive glaze.