What do you do if the object you wish to 3D print is simply too large for your build chamber?

Print size has been a limitation in all additive manufacturing processes, and is most acute in the 'build chamber' limitation of hobby 3D printers. 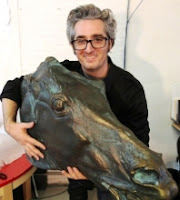 Recently, Bre Pettis CEO of Makerbot showed a sculpture of a horse head printed on a Replicator. How was it done? It was printed in parts, and glued together. In other words it was assembled, a rather traditional manufacturing process. That's cheating? Isn't the point of additive manufacturing to cut out assembly steps? Not only that, but the designer of the sculpture had the tortuous task of modelling each part separately but so that they would later fit together. Sounds like a lot of work. 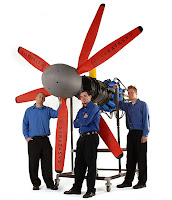 In another story of large 3D printed objects, engineers at Stratasys and Autodesk showed an enormous colored model (with moving parts) of an entire aircraft engine - full scale. While the industrial printer employed was much larger than a Makerbot or an Ultimaker, even they could not print the engine as a a single object. Once again, the team 'cheated' and it was assembled from parts. Perhaps assembly is not so much of a problem?

Large prints have always been a requirement in additive manufacturing process. Suppose you wanted to produce the accurate contour of a car body. In a process called mammoth stereolithography a single part can realized up to 4 meters in length. 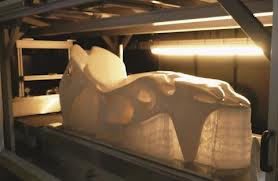 It is not inconceivable that larger industrial printers will appear in the future, but as all engineers know we will reach the point of diminishing returns ... although I also suspect that marketeers will continue to boast via stories of larger and larger prints. They do make for good publicity. But when the engineering constraints kick in, it will be back to cheating and good old-fashioned assembly.

CAD/CAM designers know all too well how to model parts that can later be assembled. It's quite an art. For the rest of us, could software come to the rescue? Could a software tool take a single 3D model - designed as such - and then post process it into parts that could be individually printed, and later assembled?

Chopper is experimental software for partitioning a 3D model into parts. The software formulates a number of desirable criteria for the partition, including ease of assembly, minimizing the number of components required, creating unobtrusive seams and ensuring structural integrity. It combines computer-aided partitioning, with user guidance.

Chopper really is remarkable. Until the day such software is commonplace, we'll need larger and larger 3D printers in order to print out the humongous objects of our imagination. So its comforting to know that Objet have announced the Objet1000 printer.

So if you need to print a single object up to 1000 x 800 x 500 mm in volume, and with multiple materials (color, rigid/soft, opaque/clear), and with moving parts and in one operation, there really isn't anywhere else to go. Take a look at this marketing video: