The real Bots are not yet MakerBots

One day, in the distant future, it may be possible to print an iPhone using only 'layer by layer' additive manufacturing (AM). Don't hold your breath. Despite all of the media attention, its easy to forget that if 3D printing expanded 10 fold the sector would still only represent less than 1% of global manufacturing. The various kinds of 3D printing available today are a complementary sidebar to traditional manufacturing. 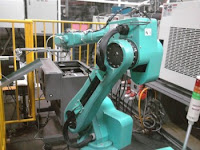 The real 'bots' are not yet MakerBots.

Consider this: One million 'Foxbot' industrial robots may be replacing one million humans at Foxconn, the Taiwenese contract manufacturing giant who make products such as the iPhone, iPad, Kindle and Xbox.

The company has placed an initial order for 10,000 industrial robots. This single order dwarfs typical sales of professional 3D printers of any kind and would be the envy of AM giants such as 3D Systems and Stratasys.

Despite the success of industrial AM and enthusiast-driven 3D printing, there are orders of magnitude more industrial robots at work in industry than there are AM machines. Whether this will change in the future is anyone's guess? 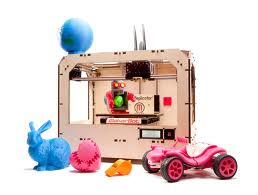 In some ways a 3D printer is a robot.

3D printer  start-ups are often compared with companies like Apple who - after the experimentation phase was over - drove the home computing revolution in the 80s and (as a side effect) set the stage for the WWW. Some are claiming that 3D printing may be bigger than the Web.

It is somewhat ironic that if MakerBot Industries terms out to be as successful as Apple, it may have to employ a Foxconn style production factory in order to satisfy demand. If so, it might not be 3D printers producing the parts for MakerBot founder Bre Pettis, but robots of the more traditional kind. The future is mixed-mode manufacturing and heavily automated.

Before Foxconn sheds its workers and replaces them with robots, take a look inside the factory as an iPad comes to life. As you do, imagine how 3D printing could take its place along the bots at Foxconn - human or otherwise.