Sign up at MyRobotNation and you can have an utterly unique 4-inch high robot figure for approximately $60 including international shipping. Don't get me wrong, I thoroughly enjoyed designing my robot but at $60 a shot I think 3DR01 will the first, and only, member of my robot nation.

At Amazon.com my kids can order an electronically controlled robot arm kit for less. The kit will contain over 150 parts including 5 motors for 5 axes of control. It will not only take longer to build than the 3D printed robot took to design, but offer greater learning value and, fun afterwards. All a 3D printed robot can do is sit on the shelf, a cute ornament, not a toy. 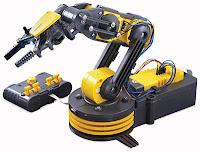 Powered by a cleverly branded UI and ZCorp printers, MyRobotNation is a marvel. It shows what is possible with 3D printing, but it is nowhere near the price point required for consumer adoption. The site is currently shipping about one and a half robots per day. (I know this because of the position of my robot in the carousel of newest robots)

Price is a similar problem at other consumer 3D print sites. I was attracted to Cubify where I found Robot Collection #1. The site is owned and operated by 3D printing giant, 3D Systems.

For $14 you can buy a set of three plastic snap together robots. A child can pose the robot or swap its parts with others for color or shape combinations. Judging by images, the robots are about 2.5 to 3 inches in height. This is the kind of toy you can find in packs of ten at our local market, for less than two UK pounds! But hey, the Cubify robots were "3D Printed" .... doesn't that justify the mark up? No, it does not. Worse, when I went to check out at Cubify I was offered no shipping options. Shipping of $38.68 was added to my $14 order. For three small plastic robots, they must be kidding.

The experience of 3D design is not something you can sell, over and over again, hoping to embed the cost within each object purchased. Unless per-print prices drop dramatically, consumers will not be handing over their credit card to their kids. After all, cute plastic printed robots and other trinkets are not new products. You cannot overcharge for them, no matter how unique they are. Rather than buying parts, parents would be far better off buying the child their own 3D Printer! And that's precisely the plan.

The Cubify service launched off the back of the Cube printer. 3D Systems hope that the experience of selecting, customizing, buying, and eventually holding a 3D printed object will entice families to purchase their own Cube 3D printer. At the prices for piece-parts I quoted above, it will! But in a rapidly changing field with better printers appearing all the time, many will stop and think twice.

Cubify is hanging its success on 3D content ... providing downloads of 3D model data to print @home. In this way they hope to kick start a 3D printing habit in every child.

Just as the Kindle e-book reader links the device to an Amazon account, the Cube printer needs to be activated and linked to a Cubify account.

Books are however very different to plastic toys. They take time to read. And analogies with home PC take up may be equally vacuous.

In the late 70s, hobbyists were already moving from building, to buying, early home PCs. Later, in the early 80s, home PC sales were driven by the availability of a rapidly growing catalog of software titles. There was a virtuous circle - a symbiotic relationship between hardware and software - each driving sales of the other. Is this an analogy for Cubify and similar services? Are 3D 'objects' the new software? 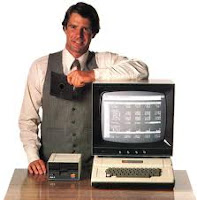 For the time being at least, 3D objects printed at home may be unique, but they are also homogeneous plastic, offer few moving parts and limited color. They resemble cheap plastic toys. How quickly will the novelty wear off? By contrast, a software title once purchased is not an object put on a shelf. It becomes a regular activity, driving further attention to the computer upon which it runs.

It's early days for consumer 3D. No one really knows what is going to stick. Perhaps what is needed at 3D printing sites like Cubify and MyRobotNation is to price 'as a service', not as a transaction. It's the experience that sells, not plastic toys available elsewhere for peanuts.
Posted by Howard Smith