Is 3D Printing the Microwave Oven of the future?

The hype surrounding "3D printing" has now reached the point where journalists in one part of the media are criticizing journalists in other parts of the media. Ironic, since it is largely the media, not the industry, that has inflated the significance of additive manufacturing. I particularly enjoyed Willard Foxton's analogy between additive manufacturing and cooking.  Writing in the The Telegraph he concludes: "It strikes me that 3D printing is the microwave of manufacturing. If you look back at newspapers from the 1970s, people predicted that microwaves would be the only device in a kitchen, and that every dish would be microwaved. That never came to pass. Like microwaves, 3D printing will be important, but this isn't the industrial revolution that techno-libertarians would have you believe."

Perhaps Mr Foxton has not yet heard that 3D Printing is also predicted to dominate the kitchen just as the microwave was predicated to do, but did not. Nevertheless, we do all own a microwave ;-) 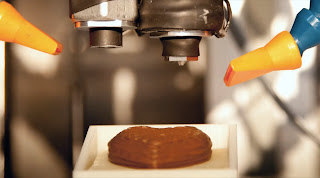