My Robot Nation and the future of 3D Printed Toys

MyRobotNation is perhaps the first, and most significant, of an expected wave of 3D Printed Toys. Unless you go online, design your first robot and then pay for it to be 3D Printed and shipped to you, you are missing out on a wonderful learning experience. I took the plunge and created this.

The UI is a child-friendly, ultra-simple 3D design tool in which the only thing you can produce is a cool robot! Despite this, the range of objects, colors, treatments and poses was compelling. 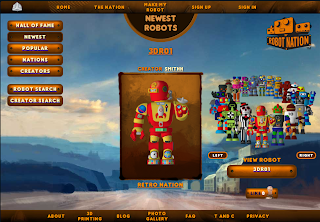 Taking into account the mass-customization offered, each robot off the 3D production line is instantly recognizable as part of the growing world wide Robot Nation. It's a marvel of mass-customization with locked-in brand protection.

The site offers a MyRobots gallery, URL links to images of your robots to share with your friends, invitations to Tweet your creations, a Hall of Fame, Popular Robots and a Newest Robots showcase.

This is interesting: Twelve hours after I designed and ordered my first robot, snappily named 3DR01, it is still the newest (and I believe coolest) robot on the site. Two days later one other robot has appeared. Can we conclude that the site is turning out roughly one robot per day? (Verification needed)

Everything about the experience was fun. I particularly liked the way my email order confirmation included an image of my very own robot.

What could make MyRobotNation even more compelling? We know 3D Printed models can include movable parts, so I desperately need:

The only downside is price. My first robot is four inches high and cost approximately $60 including shipping. The 3D Printed Toy industry will no doubt figure out the price point for similar services. Here's an idea: How about discounts for creators whose robots are popular?

I've previously written about how in 3D Printing it's the software stupid! And we've also seen how software was critical in a project that makes it possible for anyone to 3D print plastic records of tunes to play back on their nostalgic Fisher Price toy record players. Likewise, MyRobotNation would not be possible without its tailored and dedicated 3D design surface.

To produce a 3D model of a toy robot, of the complexity of my 3DR01, using traditional 3D design software, would have been a formidable task for anyone other than an experienced 3D designer (or a kid with a 3D design obsession). Even so, I believe it would still have taken many days, compared to the few minutes that I spent at MyRobotNation. Moreover, their creation would not have been as 'designed to brand'.

There is a complex trade off between generality and specificity in 3D design. For this reason, I've previously suggested that in both the consumer and industrial sectors, dedicated and specialized software will emerge as the 'front end' of every unique product to its additive manufacturing automation chain. Is a common approach possible? This is precisely what Digital Forming are trying to do. 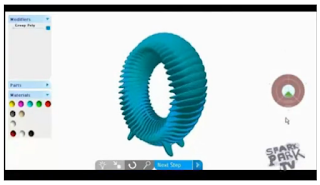 The Digital Forming technology links designers and co-designers (customers) into a shared 3D design process. The customer is allowed to adjust 'facets' of the design within limits set by the designer. The software can also be branded by the product brand owner for embedding in web sites or store kiosks.

Whether or not the approach that Digital Forming becomes mainstream, the trend is clear, with software increasingly supporting co-creation between designers and consumers as we saw with the example of Cubify and the customized 3D printed guitars.