We've discussed before how 3D printing is not a single platform nor a single technology. Here is an extreme example. Could Molecular Bean Epitaxy (MBE) be called "3D Printing"? It works 'layer-by-layer' which is the only shared characteristic of many other additive manufacturing technologies, so I don't see why MBE cannot be called "3D Printing" (grin)

MBE builds molecular scale structures to form objects - just like a MakerBot uses plastic, but on a far smaller scale.  If you want an MBE machine at home, take a look at this image: 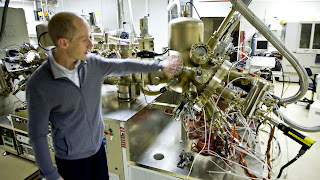 Electronics giant Sharp has an experimental MBE machine on the Oxford Science Park in the UK. Oxford’s scientists can grow a small platter of LEDs in half a day. On a commercial scale, they’ll grow four times each day, generating thousands of LEDs per platter, to produce anything from tens of thousands to millions of finished components with each 24 hour cycle.

This small MBE is actually a baby compared to those found in factories, but serves as an incubator for inventions yet to make it to high street shelves. The idea is that in the future MBE machines may be able to extend beyond LEDs and laser components, to a wider array of everyday electronic gadgets.